I know what you're thinking: more toys? Yes, MORE TOYS. 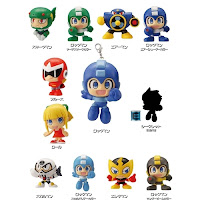 MegaHouse manufacturers are planning to release a series of irresistibly cute Rockman-themed figures later this year under their "Game Characters Collection Mini" line. A grand total of twelve 30mm figures are being produced including Rockman, Blues, Roll, a few Robot Masters, and color Rockman varients (UPDATE: all figures revealed). The twelfth figure, shrouded in mystery, looks to be a helmet-less version of Rockman or another character of similar proportions.

According to speculation, the line may indeed be trading figures, meaning you'll be purchasing them at random (unless you buy a boxed set). MegaHouse hasn't stated this to be the case; however, past mini game characters were released in a similar manner. (UPDATE: a recent listing for a box set of twelve does seem to support the theory.)

The figures are expected to release in mid-June in Japan for 399 Yen ($4.82 USD) per figure. No word on an internationally release but, if I'm not mistaken, some of MegaHouse's products have been sold outside of Japan in recent years.