Check Out Some Early MMBN1 Previews

To commemorate the tenth anniversary of Rockman EXE/Mega Man Battle Network, I thought I'd share some neat little treasures of mine: images of the very first preview assets for Battle Network 1 -- press releases and such that hail from when the game was first announced! These papers reek of early '00 nostalgia; you might have seen some of them quite some time ago... I know I have.

The first batch (below) yields from E3 2001 back when BN was first announced for release in North America.. 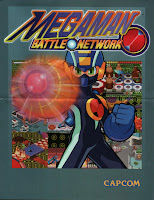 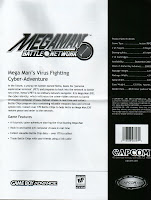 In addition to some nice pre-release screenshots looming in the background on the left page, the booklet also seems to indicate Capcom was once planning on retaining Lan's Japanese name, Netto, for localization. And hey, check out that slightly different abbreviation of PET: Personal Exploration Terminal. Sounds a tad more appealing than PErsonal Terminal, if you ask me.

The right-most images a rare site, these days. It was in an file sent out to the press a couple months before E3, shortly after EXE's release in Japan. The images suggests that Capcom once considered on naming the series in the U.S as Mega Man EXE as opposed to Battle Network, OR it's merely advertising the character MM.EXE himself, although the Roll variant seems to suggest otherwise. Feel free to speculate.

Now, On the other side of the world, Capcom Japan took to Coro Coro Comics to get the word out about Rockman EXE, a partnership that would last for the next decade... 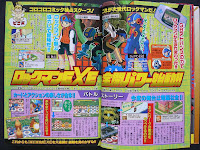 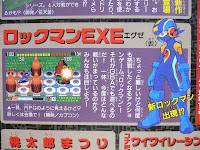 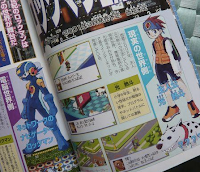 What you see here are the very first Japanese previews for Rockman EXE, which date back even further than E3 2001: fall, 2000.

Keen eyed fans will note a few striking differences from the pre-release version of the game pictured in the above magazine scans. The leftmost scan features a handful of beta battlefield shots, including a small glimpse at an an early Custom screen. Also of note, a slightly alternate mugshot of Enzan (Chaud) is present on the right page. The Middle scan houses one of the more popular beta screenshots, which features the ever-peculiar "A/B" gauge at the bottom of the screen. Finally, the right-most scan... is that concept art of Gow? Why, I believe it is! Perhaps he was originally planned to appear as early as BN1?

I've very fond memories of that middle scan, in particular. IIRC, that was the first time I ever laid eyes upon Rockman.EXE... and I hated it. Colorful, yes, but there was something about his posture -- his lankiness or something, that really irked me initially.  Of course, I grew to love the design; it was different than anything we've ever seen before from the franchise, and for that I admired it.

I'm kicking myself for this one, but since my recent hard drive crash, I'm unable to restore this neat video presentation from E3 2001 which has Keiji Inafune talking about MMBN. Lot of nice beta stuff in there, too. If I can find a backup of it somewhere, I'll be sure to share it!
Posted by Protodude at 11:13 PM