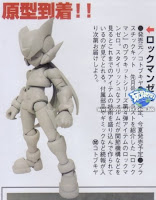 A short while back, Kotobukiya began teasing fans that a Rockman Zero model kit is in the works. Tonight, however, the first image of the figure has surfaced, albeit in grey prototype form.

The attached scan from a nameless Japanese magazine shows off just what we can expect from Zero, which looks to be boasting equal if not more points of articulation than the previous three Kotobukiya model kits (Rockman, Roll, Blues). Details concerning accessories and price are still a mystery, it seems.

The Zero model kit is said to be releasing in Japan at an unspecified summer date. Kotobukiya USA has not announced any plans for this kit, but I think it's safe to assume we'll have Zero on our shores following the release of Rock, Roll and Blues.

Credit: The Mega Man Network
Posted by Protodude at 2:37 AM