Around this time of year, Japanese game retailers clear out their cache of unsold titles to make way for new releases. Games that nobody wants find solace in carefully placed bargain bins; hoping, waiting for someone to pick them up at a steal of a price. 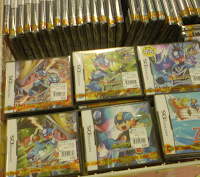 Above, piles upon piles of unsold Nintendo DS Rockman games, from the recent Operate Shooting Star to the original Ryusei no Rockman (Star Force). And no, these aren't used copies -- they're new. Never been opened, never been bought. The games on display above are going from anywhere between 200 to 380 Yen, or roughly $2.50~ $4.73 USD. Curiously, they still fetch a pretty penny to import stateside, OSS in particular. Crazy right?

The leftmost bargain bin plays host to well over a few dozen Rockman games, whilst the rest contain boxes worth of unsold Ryuusei copies (in their original factory packaging, no less). It's certainly a sad sight, but one not too surprising given the sales performance of some of these titles in the domestic market.

Whether it be Capcom setting their shipment expectations too high, or the quality of the games themselves, it's difficult to determine precisely why these titles in particular faired poorly in their lifetime. And it's not just Rockman: many games, great ones even, hit bargains quickly in Japan. Zelda, Metal Gear, Final Fantasy -- big name franchises are being sent to these "wagon sales" faster than ever before. Nintendo particularly is well aware of this trend, and as a means to spare Ocarina of Time 3D the same fate as Phantom Hourglass, has shipped a limited number of copies to Japanese retailers. A smart move, one that is said to be paying off.

Gaming in Japan isn't necessarily dying, it's sporadic. You're either a hit or a miss these days.

Thanks to reader Jimb0 for the pictures from his recent trip to Japan!
Posted by Protodude at 3:04 PM