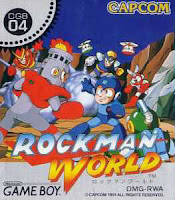 While Mega Man Legends 3: Prototype Version will be missing out on the Nintendo eShop launch next week, fans can look forward to another downloadable title from the Blue Bomber. The original Rockman World (aka Mega Man: Wily's Revenge), will be among the service's Virtual Console launch titles, on June 7.

Rockman World will run 3DS owners a mere 400 Nintendo Points, purchasable directly from the eShop. To access the eShop, users must opt-in to a new firmware update. The update will go live during the evening on June 7. A number of classic games and original titles will be readily available, in addition to Rockman World. Click here for a complete list of all launch software.

As of this writing, it remains to be see if Rockman World, err, Dr. Wily's Revenge, release on the North America/European eShop. Nintendo is expected to reveal specifics tomorrow morning. UPDATE: Dr. Wily's Revenge will NOT be available at launch for North America or Europe. Disappointing, yes, but it'll probably end up on our shores eventually.
Posted by Protodude at 1:58 AM