Alternate Universe Rockman And The Art Of Subtlety 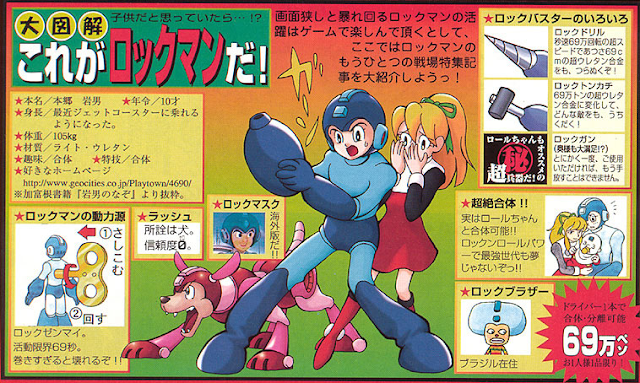 As we've seen in the past, Capcom's former Secret File magazine is home to some oddball self-homages like "Rockman Vs. Doctor Marvel." Secret File #18, however, takes the crown when it comes to the cheekier stuff. Case in point, a set of schematics for an alternate universe, retro-inspired Rockman.

The subtle, implied themes behind this take on our favorite blue robot are giggle inducing, and even a little disturbing. Read the translation at your own risk after the jump!


Great Schematic: This is Rockman!

As you're enjoying those games of Rockman's antics going ballistic in cramped screens, here we'll introduce you to one more special report of the battlefield!

[[Rockman's Power Supply]]
The Rock Power Coil. Can run for 69 seconds.
He'll break if you wind it too much!

After all, a dog.
Reliability level is 0.

The overseas version!! (a poke at the American Mega Man cartoon) 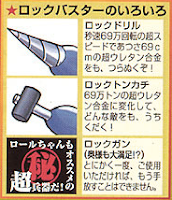 Believe it or not, he has the capability to fuse with Roll!!
With Rock'n Roll power the strongest generation isn't just a dream!!

Lives in Brazil.
Can be combined and separated with a single screwdriver. 69,000 pesos Limited to one per person!

Pretty odd stuff, right?  Certainly one of the strangest official Rockman parodies out there. It's all in good fun, so what you see is clearly and most certainly NOT canon.

The whole "fusion" affair is probably the tidbit (and implication) that'll be raising eyebrows the most. It's downright odd, for sure, but it's actually rooted in a bit of history. Rock and Roll's, uh, "Fusion ability" is something of a recurring joke, apparent in a number of official Capcom materials. One of the more noteworthy and international examples appears in Mega Man: Official Complete Works (page 144), in which Rockman is taken aback but a very specific request from Roll. Beyond that, flip open any one of the early to mid nineties four-panel books, and you're bound to see at least one comic strip focused around a "more-than-siblings" joke.

It's interesting to note that the idea of Roll being a potential love interest to Rock has quickly evolved into a series staple outside of these parodies. Beginning with Rockman DASH and into Rockman.EXE, the prospect of a legitimate Rock and Roll pairing became entirely possible, and a lot less of a taboo as the characters became dissociated as siblings.... of course, that's not to say that the act of fusion is any less unsettling.

All in all, truly weird stuff we've got going on here. Capcom certainly has a dynamic sense of humor, and isn't afraid to tread in the waters of the raunchy.

Many thanks to our pal Heat Man at The Mega Man Network for the above translation!
Posted by Protodude at 7:35 PM