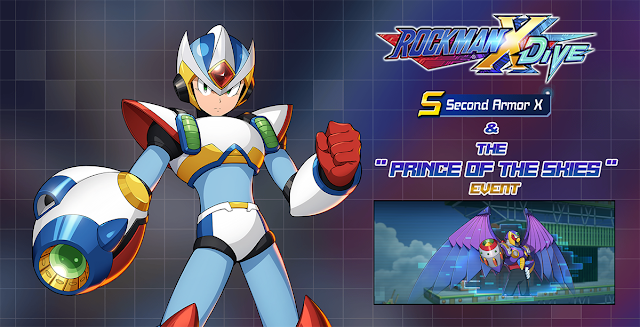 Following routine Thursday maintenance, Rockman X DiVE has been updated to include Second Armor X and a new event called "Prince of the Skies". Additionally, the game will be celebrating its first month in the hand of the players tomorrow! Find all the details after the break!


First, the new gacha banner is none other than Second Armor X accompanied by the weapon "Essence of the Abyss." The banner lasts until May 7th at 09:59:99 (UTC +8). Below you can see the teaser trailer and the final trailer.

《S Rank Weapon-Essence of the Abyss》

"Curse from the abyss. Brand-new sprayer weapon is coming!
Chance to weaken target’s DEF after attacking!
Ravage your enemy if you want!"

This event works exactly the same as the Candy Factory event, the only difference is that you don't have to collect items throughout the stage. All you need to do i simply aim to get the three stars: Stage clear, Complete the stage in 400 seconds and HP is >30% when completing the stage and you are good to go.

Some character and weapons give you some perks. They are as follows:


Starting tomorrow there will be a new event featured in the "current event" tab called "Prince of the Skies Support Event". Here, you can get lots of rewards like X and Zero Memories if you complete certain requirements. The event last until May 6th at 23:59 (UTC+8)

Tomorrow will also bring us the First Month Celebration Pack to the store (paid content) and the extension of the Elemental Metal Daily Pack Sale until May 7th at 03:59 (UTC+8). 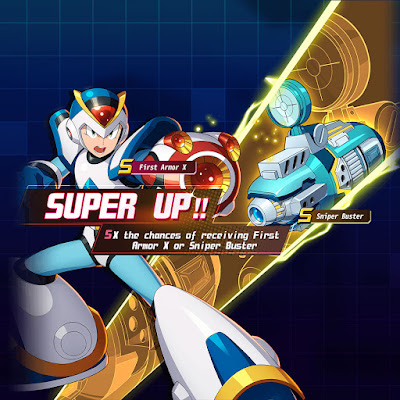 And lastly an new gacha banner will be available tomorrow with improved chances to acquire First Armor X and the S rank weapon "Sniper Buster."
Posted by Reploid21XX at 9:36 AM