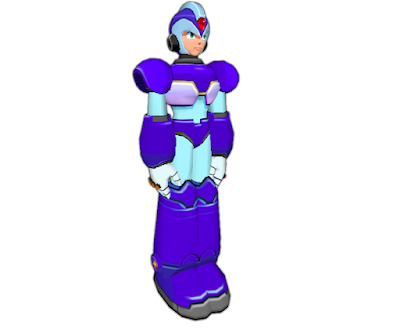 Sit down, close your eyes and take yourself back to 2004. Recall, if you will, that the earliest screenshots for Mega Man X: Command Mission featured X wearing his original blue armor (albeit slightly stylized). This was a time before Capcom incorporated the now fan-favorite "Stealth Armor". If memory isn't your strong suit, it originally looked like this and this. In 2010, additional screenshots of this unused, unarmored state were discovered lurking inside the E3 2004 demo build, too.

Flash forward to today, I am pleased to report that a startling discover has been made among The Cutting Room Floor community. A one Chris Shade was poking around inside the retail GameCube version of the game when, to his surprise, he found a "demo" folder. Inside, Chris found model and texture data for X's unused armor. That's right: it's been hiding under our noses this whole time. Sixteen years, in fact.

Chris took the liberty of extracting the model, which you can download here. If you have the know-how, you can restructure it to look like the above image. And if you're a real wizard, you might be able to mod it *back in* to Command Mission. You could even put it in Grad Theft Auto V, I dunno. I leave that in your hands.

So yeah; this is a pretty neat discovery. It goes to show you that we're still learning new things about some of our favorite games after all these years!
Posted by Protodude at 9:03 PM