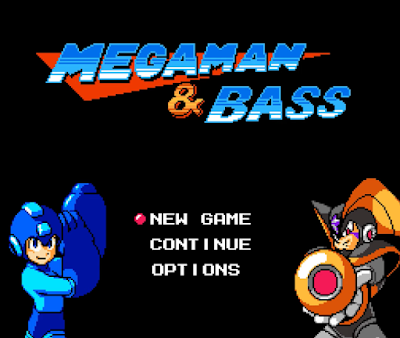 For those of you with good longterm memory, you may recall a small series of fan-games by a group called Mend who produced "de-makes" of both Rockman 7 and Rockman 8. These de-makes became known as Rockman 7FC and Rockman 8FC ("FC" meaning "Famicom"). Way back in 2009, we reported that the group was also looking at de-making Rockman Rockman (Mega Man Powered Up), Rockman Mega World (Mega Man: The Wily Wars) and Rockman & Forte (Mega Man & Bass). Unfortunately those projects never reached completion.

However, there is now renewed hope for a Rockman & Forte de-make in the form of "Mega Man & Bass FC"!

However, there is now renewed hope for a Rockman & Forte de-make in the form of "Mega Man & Bass FC"! Revealed on YouTube and Twitter by Triple Squid, this project originally started out as a late April Fools prank last year. Triple Squid released a fake trailer for an 8-bit Mega Man & Bass project as it was also around the time of Mega Man & Bass' 21st anniversary. After the video was released, a lot of people believed the project was the real deal.

Fast forward to April 2020, Triple Squid received a message from Kensuyjin33 (a past sprite contributor for the Mega Man X Corrupted fan game) and the rest, as they say, is history. They are now a team of 1 programmer, 7 spriters and 3 composers all working to bring this project to fruition! You can check out the full reveal trailer below.


No release date has been set for this project yet; these things take time to complete, after all! But you can check out Triple Squid's Twitter here and their YouTube channel here for any updates.