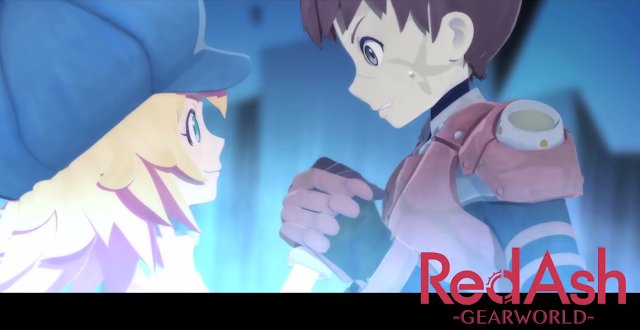 Still no word on the game (don't ask; no one knows), but the Red Ash animated adaptation from Studio 4℃ is very much alive and kicking. After the break, we have our first look at Red Ash: Gearworld. It's a short glimpse - approximately 12-seconds - but long enough to give us a feel of the style Studio 4℃ is going for.

"In a future society where nanomachines have become incorporated into genes, the 'Nano race' who possess special abilities are oppressed and discriminated against by the "Pure race" of normal humans. Among the Nano race is the young lad named Beck, a hunter of legend who possesses the special ability of 'Red Ash"'transformation.

In order to pay for the costly operation that would allow him to become a member of the Pure race, Beck and his mechanic companion, a large but timid fellow named Tyger, have taken on dangerous work zipping to the old world in their Parallel Machine.  Then one day, they suddenly cross paths with a young lady named Call who is being chased by Safari and Stripe, a mysterious pair of crooks. Thrust into a mixed-up situation, together they zoom off to Gearworld, but are pursued relentlessly by the shady duo and their leader Deny, who ultimately commence an attack on Beck and his companions...!"


The OVA is expected to launch sometime later this year.
Posted by Protodude at 4:52 PM