Mega Man Battle Network Started Out As A Horror Game 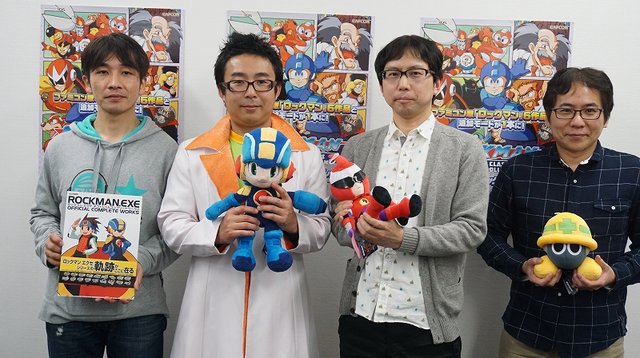 Coming from an interview at Inside Games, translated by MMBN3D:

Thank you very much for giving us the privilege of gathering these staff members for this round-table discussion— 10 years after the last entry in the series.

Eguchi: It’s been such a long time. Since the launch of EXE6, I think. At any rate… all of us have gotten older! (laughs)

Ishihara: Back then, Matsuda’s hair went all the way to his shoulders. (laughs)

Matsuda: Right right, I had blonde hair. (laughs) I still clearly remember how the development went— We were developing a launch title for the Game Boy Advance. That day’s environment felt fresh.

Now that you mention it— It was a launch title, wasn’t it? Even though EXE was of the first generation (of GBA titles), it already gave an impression of perfection.

Eguchi: Actually, the team’s first game was a horror game.

Oh? What do you mean?

Eguchi: It started with, “what should we make for the GBA?” It had us making a game that links to your heartbeat with a wearable device. The theme was “having fun while your heart pounds”-horror game.

Matsuda: I went to Expoland’s haunted house for research.

Kaji: You remember it quite well, huh? (laughs)

Eguchi: Thinking that now… how did that become EXE? (laughs) I wonder…?

Kaji: Certainly, the mechanics became quite difficult to handle.

Matsuda: After that, card games gained popularity around that time. We wanted to reap the trend while upholding Capcom’s pride.

And when you truly think about it— That’s how EXE came to be, correct?

Eguchi: Of course. I can say with confidence that it followed the proper process, but it had that sort of feeling at the time. (laughs)

Looking at the computers and internet affairs from that time— Windows 95 had come out, Y2K didn’t happen, the worldview had really become one of [Computer networks].

Eguchi: We spoke about this earlier— At the time, card games were popular so it started [with a card game only Capcom could make] as the theme. In addition, this project’s goal was decided from the start, it was decided that Rockman’s IP would be used.  The system was a mix between Rockman’s action and a card game. This became Data Action.

In short, the cards were replaced by data as Battle Chips and using those to fight was the  Rockman character. Adding to that was that the worldview, quite appropriately a network society.  And just like that, those became the setting and system from the very start.

Upon constructing the system, what points were you focused on?

Eguchi: EXE was an action game with no jumping. Innovative, right?

Matsuda: “Let’s make a game where a kid who’s not great at the action, can rely on strategy instead and still win.” That was something we kept in mind at the time.

Lately, smart housephones and smart houses have been coming about, and everything’s connected through the internet. You can also easily talk and reply to people with a smartphone. For better or worse, that which occurs in EXE has been steadily coming to fruition in reality. How do you feel about that as the creators?

Eguchi: Finally, the times have caught up. (laughs)

We took great care for this “standing on your toes” feeling for the story/scenarios, too. We drew on [a probable near future] as a theme. First and foremost, we thought to create an world that kids would say, “If net society was real, it’d be kinda like this!”

Matsuda: Definitely, “standing on tiptoes” was something that we kept in mind greatly.

More Battle Network development secrets will be translated each day from MMBN3D! Stay tuned!
Posted by Protodude at 10:49 PM