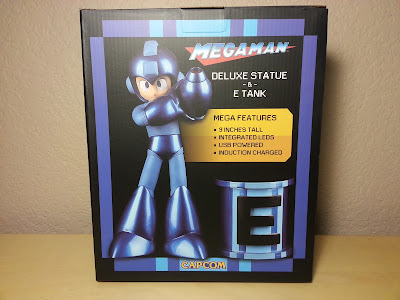 It looks like Amazon's exclusive Mega Man Legacy Collection statue and E-Tank bundle has begun shipping out. While you await your order, here's a gallery's worth of images from NeoGaf member Diggeh. There's some excellent shots of the Mega Man statue and its complimentary E-Tank piece.

If Diggeh's box is to be believed, approximately 2015 (literally two thousand fifteen) statues were produced. The Mega Man statue is based on the 25th anniversary mold with modified feet (no more ugly peg holes!). To illuminate the statue, you must place it in close proximity to the E-Tank. It's not complicated, but someone thought it would be a good to set up an FAQ.

Anyway, seems neat. If you already own the 25th ann. statue, I personally don't believe you're missing much.
Posted by Protodude at 5:12 PM