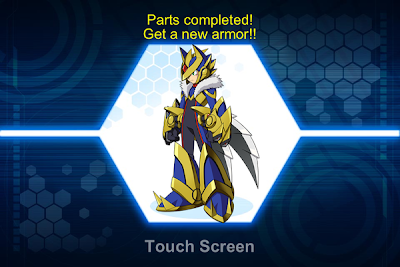 The time has come for another Rockman Xover update. This update brings the new EX World 1 stage, which is a more challenging version of World 1 with the same bosses. To obtain the EX World, simply defeat all World 1 bosses at Level 8.

Furthermore, OVER-1 is getting a new armor. Dubbed OVER-2 Spec 2, it's currently the most powerful armor in the game, rendering previous armors obsolete. I guess it's safe to assume Spec 2 models of previous armors will be along some time. Hit up Capcom Unity for more images.

Thanks, Django!
Posted by Protodude at 8:45 PM