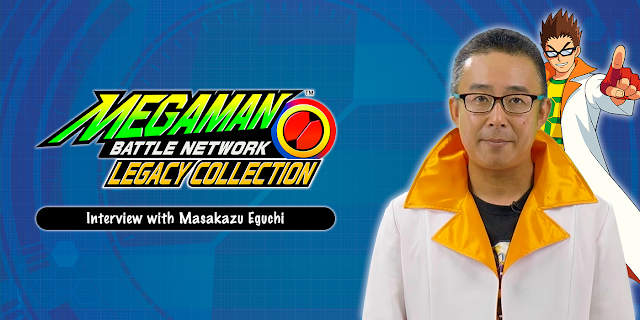 Back in December, Rockman Unity's Ucchy-san had the chance to interview Mega Man Battle Network Legacy Collection director Masakazu Eguchi (aka Mr. Famous) as a follow-up to the news about the game's release date date and online feature.
The interview covered a variety of different topics, including some minor bits of news that weren't announced during the video stream or trailer.  And now, thanks to our friend Sidier, you can read the interview in English! Check it out after the break.

Regarding the BGM after clearing Mega Man Battle Network 6

I’m not if I have this kind of modest of an adult, but when you  said that this is a “cross I’ve had to bear for 20 years’ time”...  was that thing intentional? Or a bug?

Note: This question it's addressing what Eguchi said during the Capcom TV TGS Special Program regarding the track "Incident Occurrence!" endlessly playing in Mega Man Battle Network 6 after you defeat the final boss.

To be frank, the problem was that I forgot to specify that the song had to revert back to the usual music. (distant look) 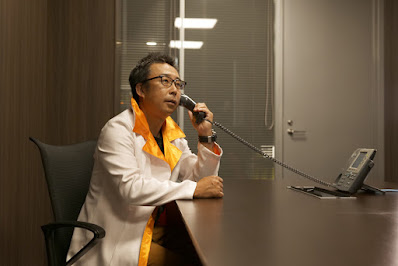 When development on the collection started, I placed that on the “things to fix” list right away. Whenever I saw that topic discussed on the internet, I became gloomy. So when I had a chance to make up for my blunder, I was fired up! 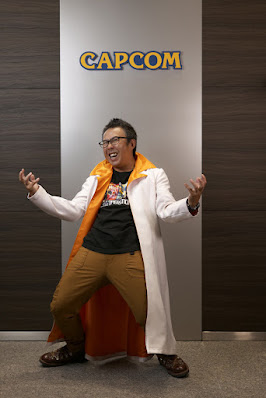 *laughs* Is that so? Well, since you couldn’t issue a software patch post-release back then, I'm glad you got a chance to fix it! 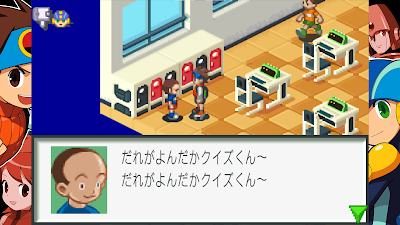 We’ve seen how the 3D Mega Man sings the “Quiz Song” on the title selection and gallery screen as he shows us around. I’m curious to see what other things he can do! And the pre-order bonuses and limited edition bonuses are amazing, too!

See, these 3D character models were something I kinda forced onto the team. I thought we could use this collection to show MegaMan.EXE inside of a PET filled with all of his adventures and memories. The schedule was a little tight but the art director, Kaji-san, encouraged us to go for it.

These models were made by staff that worked on the Star Force series and Mega Man 11. I am personally very satisfied with the high quality of the work.

Wow! Mr. Kaji, who was involved with the Mega Man X and Battle Network series! And the staff of Star Force series and Mega Man 11! Amazing! I like how you worded the PET is "filled with all of his adventures and memories." It's so wonderful! Makes me cry a little. 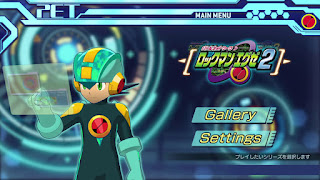 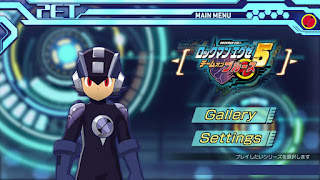 As for the pre-order bonuses, Vol. 1 has the “Hub Style” and Vol. 2 has “Dark MegaMan” as special skins. You can swap them in the main menu, so check them out!

Now that’s amazing! You can get them by pre-ordering either the physical edition or the digital edition!

One thing to note... you can change the skin, but it's just a "skin" and the voices played back in the game are basically the same as the default voices. I actually wanted to add more voices, but due to “adult reasons”, we couldn’t… I hope that you understand that. (what a raw story)

I see! Well, I hope they’ll understand that. Maybe they will imagine the voices in their minds and they’ll make up for what’s missing through their imaginations! 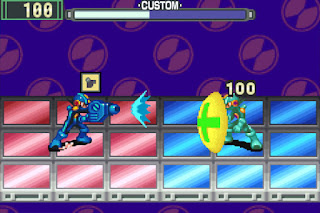 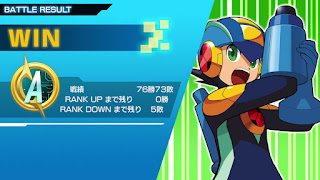 OK! So! Now let's get to the main topic, "~Answers to the specifications you are wondering about~"! First, why are two games included on a single game card or disk, even if it is a set?

This is because of how the online mode works. For example, when you make one version with all 10 titles, the software considers each volume to be a completely different game. You wouldn’t be able to find a match for online mode.

Our team considered creating a version that combined all 10 titles in the series into one, but we decided on the current format in consideration of the joy it would bring as a collection and the affordability of splitting it up.

I see, so that’s how it works! You made a big announcement about the online features in today's trailer and the video that went into details about it.

Unfortunately, the game does not support cross-play and cross-save with other console versions, but the game screen related to communication was shown for the first time. The Official Center emblem is cool! I feel like it’s become more real than ever.

This is the core of the series, after all. I’m happy we can finally showcase it!

Sure! Back then you needed a link cable, but nowadays you can play PvP battles from home! I’m so happy about it! It’s indeed the “Battle Network”!

For young people today, online battles may seem like an obvious element, but back in the Game Boy Advance days, it was a dream feature. We held battle tours all over Japan back in the day, and I was always surprised about how far some people traveled just to partake! But the day in which you can Net Battle players all over the globe from the comfort of your home will soon be realized! 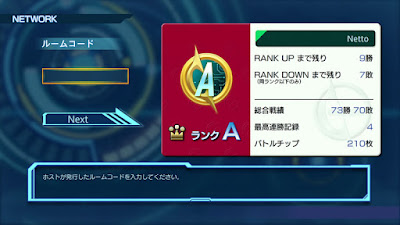 The future depicted in the series is becoming a reality. Even the dreams we had back then are coming true! I wonder if we'll have the chance to face off against former Net Battle champions thanks to online. I'm sure my score will be horrible!

I understand. I, too, grew up in the showa era. However, I must warn you about one thing. Back then, you had the opponent in front of you.. so if you lost your Chip to the winner, you could try to weep and beg for mercy. If they were nice, they'd return it to you. And yet this collection's battles are online. Faceless! There will be hard battles, completely devoid of mercy. Weeping won't work!

But I suppose if you're in contact with someone in a private match, MAYBE that same tactic will work on them!

*laughs* Even if you bow down, they can’t tell over the internet! Merciless, indeed!  Another thing announced today was the availability of the “Event-only Chips”! I'm sure everyone was thrilled to hear this.

Me too! I think some of the players noticed it when they played the TGS demo, but today we're announcing the inclusion of the event-only chips from BN4 to BN6! This collection has ALL of those special chips!

You know, those chips were quite the buzz back in the day since you could only get them if you came to a physical event.I think this’ll be a great chance for many people to get them for the first time! You'll be able to experience how destructive they are! 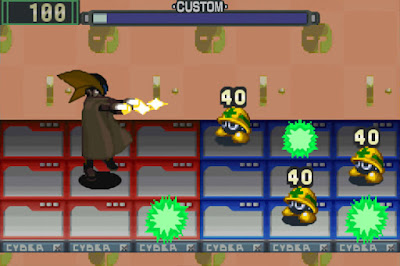 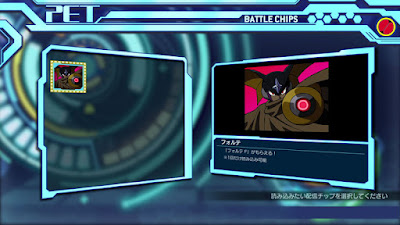 Good point. Not everyone could afford to go to those events, after all. Guess many felt envy at those who could get those chips!

They’re very powerful, so you decide when you want to use them! For those who haven’t played the games before, I personally suggest to use them after you've beaten the game(s).

By the way, what about the “Legendary Red Reploid” Chip from BN4? Can you get it through “that trick” that’s been recently discovered?

Trick? Oh, you mean the lottery number? Back in the day, we did make a Lotto Number so that you could obtain it regardless of the usual method. However,we never got to announce that method publicly. It's remained in a deep slumber until recently.

*laughs* That’s it! So that Lotto Number was purposely part of the game!

I honestly never expected someone to find out about it, though! But rest assured; we won't deprive you of the right to obtain it now. You will be able to use it, yes! By all means, use the legendary red fellow! 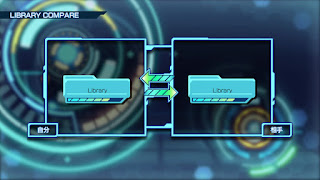 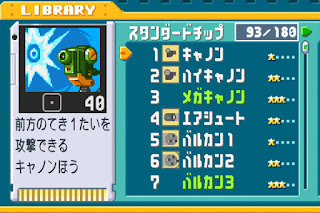 *laughs* Use the triple slash sword! Filling up the library will be a major task when you beat the main game. Speaking of which, the trading system was revealed today as well. I’m glad that you can trade Style Changes and Navi Customizer programs, too.

How will public trade work? Not to mention the library comparison feature from BN3!

Public trade is, as you suspected, trading with people all over the world. You can set up a region delimiter to allow you to choose which region works better for your network provider speeds. You can use the private trade option to trade with very specific people, like your friends. 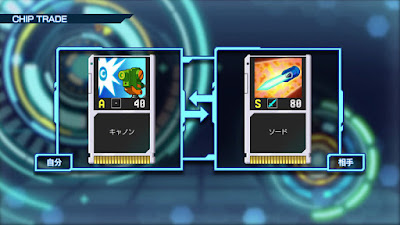 Trading with people across the world would make filling up the library easier, wouldn’t it? Also, you mentioned that you tuned certain gameplay aspects to accommodate online functions. When I saw the footage of the Custom Screen screen, I understood why. There's a timer to choose chips now?

Yes. It’s set at 20 seconds. However, it’s possible that the amount of time might be changed between now and when the game releases.

But yes; I added it to avoid situations where, say, the match comes to a stop because your opponent got a stomach ache and ran to the bathroom.

*laughs* That’s an important feature! There could be other interruptions too, such as a package being delivered.

We didn't have this sort of system in place back in the GBA days. There wasn’t such a system back when the GBA days. I made sure the size and placement of the timer didn't take away from the Custom Screen that fans know and love. 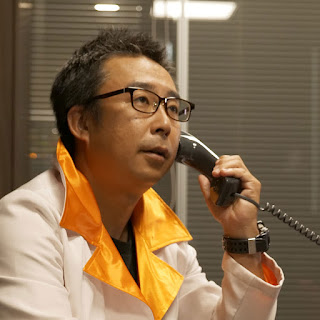 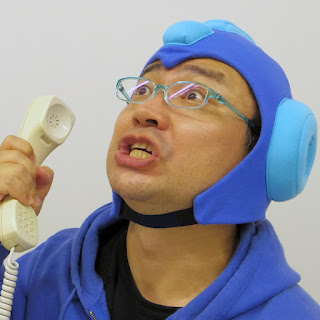 You really care about the little details! You said that you’d tell us about more changes being made for online functions in the future, but… I want to know right away! Tell me something! Even if it’s just a trivial detail!

Let’s see… well then, let’s talk about the Prism Combo. I’m sure you’re all eager to know about how it’ll work! It was a forbidden Chip combination that started up quite the fuss back when BN2 first released. However, I made sure to tweak it a little bit for this collection.

When you play the main game, the combo is untouched. But for online battles - because we decided to focus on balancing matches - we shortened the amount of time the Prism Combo is active. We also adjusted the "knock-back" and "invincible time" to make it work just like it did in BN3.

We wanted to preserve your Prism Combo memories as vividly as possible. We took that under great consideration.

That was very interesting! Can’t you tell me something else?

I’d love to tell you more but if talk without permission, the producer will scold me!

Thank you, Mr. Famous! I look forward to more news!