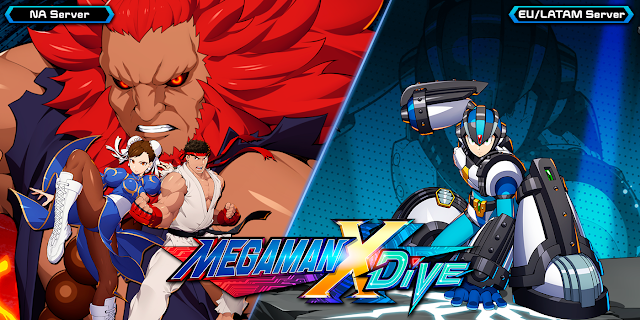 Next week on the global version of Mega Man X DiVE, the European and LATAM servers are finally getting Gaea Armor X. Meanwhile, the North American server will see the return of Street Fighter V collab characters Ryu, Chun-Li and Akuma. No new characters are expected.

Next week the North American server will be getting a capsule featuring limited characters Ryu, Chun-Li and Akuma from the Street Fighter V collab. The Capsule comes with a single free 10-pull and the DNA Code for all of them will be unlocked too.
A special S&A Only Capsule will be available as well that includes Gaea Armor X. The first three 10-pulls can be activated with non-paid EM. Afterwards, it can only be activated with paid EM.
A new Popularity Capsule featuring Super Bass and "Iris -another" will be available with a free 10-pull ticket obtained as a reward from the 7th day login reward.
Lastly the 6th Boss Rush will pit players against Boomer Kuwanger, Raider Killer and Drill Man. The main reward are memories of the machine gun Heart of Gold.

Four Street Fighter-themed packs will go on sale in the shop. Note: The price of each pack was not available at the time of this writing.

Gaea Armor X finally lands on the European and LATAM servers next week and it comes with a free 10-pull everyday. In terms of what to expect from DNA, Magma Dragoon will get his unlocked.

Lastly, the next XDiVE Maximum Race event will take place.

New packs themed after Magma Dragoon and the Luna New Year will go on sale in the shop.