On the latest episode of FwooshCast, Jada Toys' Juhn Lim divulged a ton of updates on their upcoming Mega Man action figure line.

The discussion starts at 35:33 in the video above. We've gone ahead and extracted the most noteworthy bits after the jump below. There's some new images to ogle at, too! 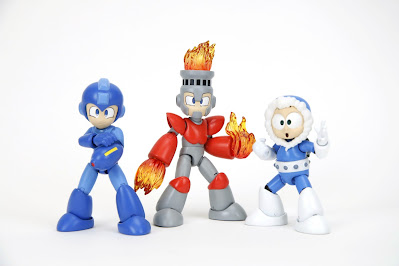 Wave 1 will go up for preorder sometime in Q1 2023 and ship in the spring. Tooling is complete for Wave 1 and paint masters are currently being made. Meanwhile, tooling is underway on Wave 2. Wave 2 won’t be far behind Wave 1 thanks to the shared tooling between the figures.

Each figure will come with plenty of accessories, and each one will have at least one “neutral” head and one “expressive” head, as well as effect pieces. Mega Man will come with an alternate non-buster forearm part, alternate hands, two heads, and a blast effect piece.
The figures are actually being priced at $20, not $25 as was previously announced. Because the figures are small, they don't really work with the typical 6" figure-sized boxes. Because of this, the packaging size is being reduced and the figures will be priced accordingly.

Despite the reduced cost, Jada are not skimping on deco and sculpting! is Backside details like Ice Man’s backpack, the interiors of Fire Man’s cannons, and undersides of feet will be sculpted and painted. Jada are prioritizing sculpt and paint detail to make the figures feel like premium collectibles. 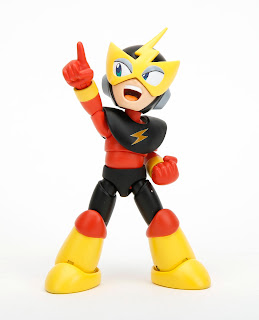 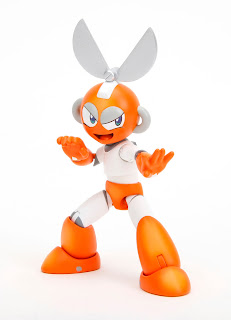 Figures shown are prototypes and some details won’t be reflected in the final product. The blade edges of Cut Man’s cutter will come to a point and although pins are visible at the joints, all joints will have no visible pins.
Waves 1 and 2 will focus on Mega Man 1... but Jada are looking to branch out into the more "out-there" designs and make figures of Robot Masters from other games. Wave 3 will be revealed at Comic Con, and will be “completely unexpected”.
Jada Toys will be watching the performance of the figures at retail. If the line does well, they’ll be more willing to delve into the depths of Robot Master catalog. “We’re not afraid to do obscure characters,” says Juhn when asked about the potential for figures of Time Man and Oil Man. Supporting characters like Dr. Light and Wily are also on the table.
Sounds like we've got quite a bit to look forward to on this front. Stay tuned for updates!
Thanks a ton to Ben for the tip and transcription!
Posted by Protodude at 7:34 PM