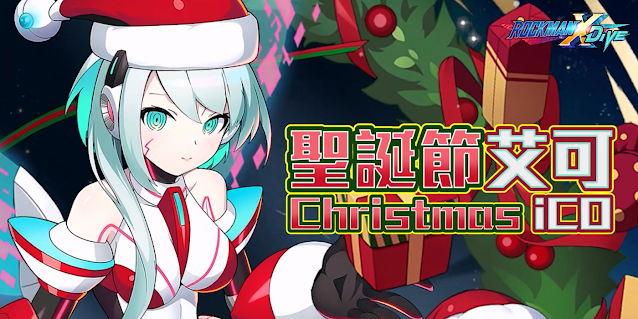 We can't say Christmas iCO joining Rockman X DiVE's roster will surprise anyone. The holiday-themed character was foreshadowed last Christmas and then teased in the new content roadmap (not to mention being outright spoiled in the card gallery a few weeks ago).

Nevertheless, it's that time again for another X DiVE Christmas event. You can find all the details after the break!

Christmas iCO's first active skill is Gift Delivery Elk. She rings two bells to summon a reindeer that will charge forward and damage targets in its path.

The attack ignores terrain and tracks targets. You receive a "gift" when you use the skill and another "gift" when the skill hits the target. Depending on the number of "gifts" accumulated, you can receive a variety of effects like damage or defense enhancement.

Her second active skill is Gift Unboxing. Summon a giant gift that deals damage in a wide area, which explodes to deal even more damage. She will gain defense enhancement by 24% when using this skill.

With one of passive skills activated, she recovers HP equal to 24% of the attack when a target is defeated with Gift Unboxing.

As for the general passive skills, she can gain invincibility and debuff protection for a short time when her health it's reduced 30% among other things.

Judging by the roadmap, the game might not feature a New Year-themed character in coming weeks. However, the development team plan on releasing the final Story Mode chapter and raising the level cap before the year ends. Look forward to it!