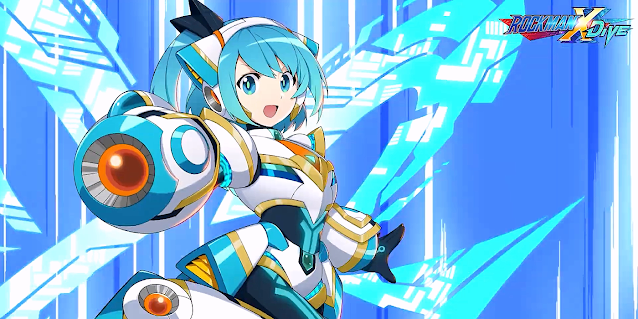 Before the year ends, we have another character joining the Rockman X DiVE roster. It's not a New Year-themed character like Cinnamon or Iris were in previous years. Instead, the game is closing out 2022 with the previously-teased DiVE Armor RiCO... and she packs quite a punch.

Her second active skill is Recreation: Double Genmu Zero. Launch gigantic energy blades to damage all enemies in its path. By changing chips, the skill will switch to "Rekkoha" or "Raikousen". Some of the passive skills will allow her to use this skill repeatedly and increase movement speed by 37.5%.

Outside the active skills, by unlocking specific passive skills she can gain a shield that can withstand 110% attack damage, a debuff shield, and gain damage and defense enhancement by 30% when equipping specific weapons.

She seems to be a strong character on paper, albeit the trailer mentions her "inability to recover HP" as her main handicap.

This week chapter 20 of Story Mode will be released too. As usual, the level cap should be raised and all the things that come with it like new armor, co-op stages and so on.

And that's all for this year when it comes to Rockman X DiVE. Next year promises to be an interesting one with more DiVE characters and weapons coming along.  Of course, there's a new collab with a Capcom IP in March too. Look forward to it!