Rockman X DiVE - The Witch and The Free Gacha 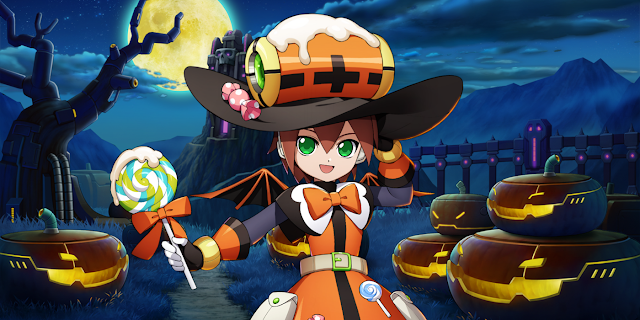 A vampire, a succubus and now a witch joins Rockman X DiVE's Halloween event. Halloween Aile is here and brings a trick under her hat -- free gacha draws! Check out all the info after the break!

The banner for Halloween Aile and the S rank weapon "Ancient Relic" is already live, lasting until November 11 at 15:59 (UTC +8). You will have 10 free draws every day until the end for a total of 80 free draws. Good luck! 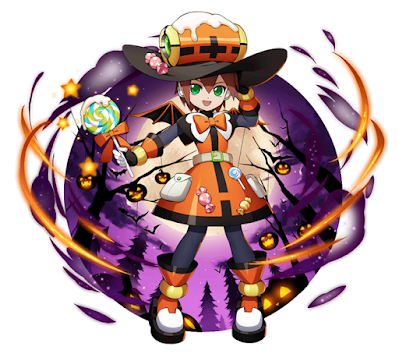 The shot will explode after hitting the target, inflicting 97.50% attack damage to targets within range. The shot will then release multiple energy projectiles to cause further damage.

Receive enhanced attack and increased speed that cannot be cancelled.

ATK Amplification: Boost the attack enhancement for O.I.S. by 20%.

Mobility: The preparation time of the O.I.S. is reduced by 20%.

Witch Magic: When you use O.I.S., you can use Freeshooter again.

As per usual with a big event's second week, you can find new missions in the mission tab related to completing the "Halloween Scare Challenge" stage in all the difficulty modes. There's  a few daily missions, too, such as "complete co-op 3 times" or "accumulate 2500 event point". You now the drill.

The Castle x Ghost x Halloween event continues and the Conquer the Brambled Castle event has been changed to Fight the Pumpkin Head Dark Man. It works exactly the same as the previous event: you get one lucky draw ticket by doing daily missions like "complete race mode 1 time", "complete co-op 1 time", "complete one level of the Jakob Orbital Elevator (challenge difficulty) and "defeat 100 enemies". 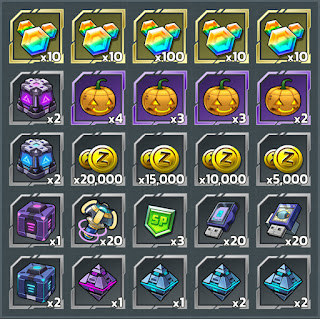 New levels for the Jakob Orbital Elevator are available today. Levels 61 to 65 for the challenge mode which ends with a fight against Mega Scorpio with a 333 health bars.
A new event is live now that is tied to the Jakob Orbital Elevator, Clear the Jakob within the Time Limit. The event lasts until November 10 at 22:00 (UTC+8).
In this event, you will asked to complete specific levels in the three difficulties available. All of them range from level 10 to 20 so is likely you will have all the missions already completed and you will be able to get all the rewards right away.
Mostly EM and items related to the card system but most importantly a new card: Burn Dinorex which you will be able to rank up to the maximum thanks to the 6 cards you will get from this event. 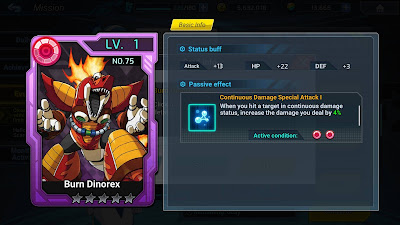 Starting today we have two new gacha banners: Special Commemorative Capsule that lasts until November 25 at 15:59 (UTC+8) and it lets you activate the banner one time each day for free and will also yield a souvenir token that later can be exchanged for rewards in the shop.
We will get a total of 22 tokens than can be exchanged for the following items: 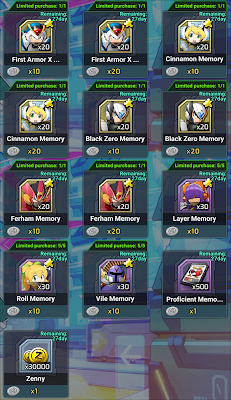 Next we have the Attack Type Hunter Capsule that lasts until February 3rd, 2021. Upon login, you will get in your in-game mail an item called "Attack Type Hunter Capsule Starter". It will let you draw from the banner one time for free. After that it works like a regular banner.
In this banner you have 1.5% chances to get and S rank character and a 3% chances to get an S rank weapon. so pretty much works like the other banners minus the Special Commemorative Capsule which has a smaller drop rate.

If you want to check a few bug fixes and the items added to the shop today, you can do it here.

And that's all for this week! Let's us know if the free gacha was nice to you in the comments!