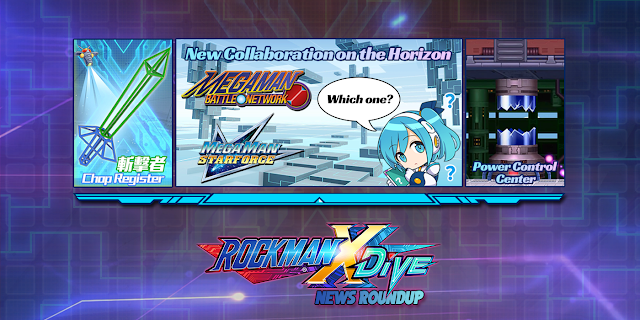 Over the last few days, the Rockman X DiVE development team released a couple of videos detailing next week's content update, addressed some players' concerns, and offered a tease of what's to come in the near future. Let's check it all out after the break!
Two days ago, the dev team released what they call "Yoda P (Producer) DiVE TiME" -- the first of what will become  a monthly video series with Yoda Hideto, the producer of the game from Capcom Taiwan.
Yoda starts out by saying that players' opinions are important to them, and they're used as a reference to adjust the game. He encourages players to send feedback to improve the game. Later, he goes on to announce the new boss for the boss challenge mode: Chop Register. There's more about that in the second video.

Next the "Prince of the Skies" event is returning; a repeat aimed to give new players and Japanese players the chance to get the Storm Eagle chip. For those of us who've been playing from the beginning and have it already, the event will offer limited cards.
He continues talking about the next crossover between Rockman X DiVE and an undisclosed Mega Man series. They plan to share more news about it on November 11th. Next, he gave us a hint of a new character coming in the middle of November: a cool character. And that's all the info he was willing to share!
As you all know, we already had crossovers with the Classic, Zero, ZX and Legends series so what's left? Battle Network and Star Force. They are doing it in chronological order so I think it's fair to say it's going to be Battle Network. If that's indeed the case, let us know in the comments which characters would you like to see!
And to finish the video, Yoda addresses some players concerns like using the same BGM over and over again in events. They are working on it and the first step was to make a brand new remix of the Dark Man Stage theme for the Halloween event. He talks about players complaining about the repeatability of the game which is mainly how the game is designed.
Yoda also addressed the concerns of "hard working players" that want more unique rewards for their hard work and the need to add "glorious and special rewards" to make events more appealing. Apparently, both of these things are coming. Yoda also goes into talking about the connection issues in PVP and Co-op. He again says they're working on it and performing fine-tuning with each update.
And to end his speech, he encouraged players to raise their voice about the characters, weapons and skins they want to be added to the game. You can share your demands to the dev team's official social media accounts!
The second video that was released earlier today. It brings us a preview of next week's content update which, as you may know, will bring the "X Ver.Ke" skin.
Boss Challenge is getting two new bosses: Byte and Chop Register. You will remember Chop Register as one of the sub-bosses from Rockman X2, but this time he has new moves. Byte is also becoming the next chip which gives you a defense boost when hit by an attack if you're equipped with a melee weapon.
Story mode is getting a new chapter: Power Control Center. It features the Volt CatFish stage from Rockman X3 but don't expect him to show up in the last stage. The Deep Log always has issues matching content, doesn't it? Also, as expected with a new story chapter, the level cap will be raised to level 120.
And finally, the events were you can get Zenny, Exp, Armor and DiVE Trigger enhancements will have a new difficulty.
That's all for this week. Keep your eyes peeled because they will announce the new character (coming this Wednesday) at the beginning of next week!
Posted by Reploid21XX at 2:03 PM