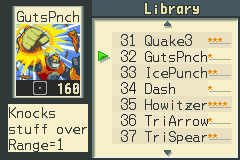 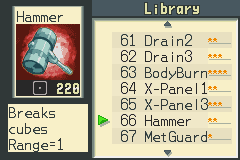 Re-balanced Battle Chip damage was one of the more subtle, but welcomed changes to Rockman EXE: Operate Shooting. A little over thirty of Mega Man Battle Network 1's chips had their damage value increased for the better. Guts Punch and Ice Punch, for example, were buffed from 60 and 80 damage to 160 and 150, respectively. Hammer is one of the more striking examples; buffed from 100 to 220 damage!

Now, these balance changes can be applied to the original Battle Network via a handy fan-patch. A cool person by the name of BOBdotEXE just released a "Operation Patch" for MMBN1. It's described as "a simple mod that aims to re-balance the battle chips as they were in “RockmanEXE operation shooting star” and "this will keep the power levels much closer to the later games in the series."

Hey, it may not be the English OSS patch you've been looking for but it's pretty neat in itself. Grab it here!
Posted by Protodude at 8:10 PM