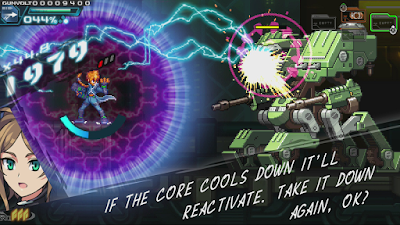 I had the opportunity to play the Switch version about a week in advance and I gotta say, it's pretty much the definitive Gunvolt package. While the games themselves run as smooth as you could possibly want (in full 60fps no less) it was the presentation that really drove it home. I enjoyed both games on Nintendo 3DS... but the intrusive heads-up-display made for an uncomfortable experience. There was just too much going on in such a small space. Thankfully, the HUD in Striker Pack is smaller due in part to Nintendo Switch's resolution. I was able to play both games better than I did on 3DS. 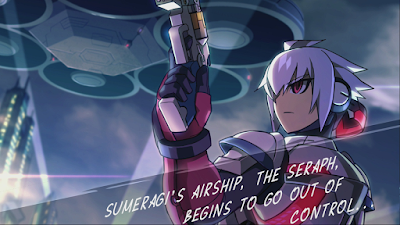 Speaking of resolution, in-game text is MUCH easier to read. That's a huge plus for my diminishing eye-sight. Also, most if not all event scenes are presented in HD. They look great. My only wish is the high-res treatment applied to everything else too – sprites, backgrounds, menus, etc. Remember, Striker Pack is NOT an HD Gunvolt. I'm hopeful, though, that's a product for the future.

In terms of content Striker Pack includes all of the 3DS version DLC from the get-go: additional stages, bosses, bonus modes and new songs. That's all well and good, but the list of NEW stuff for the Switch version tops the cake:


If you've yet to play Gunvolt 1 or Gunvolt 2, you really should pick up Striker Pack on Switch. It's the best version of both games (at the time of this writing). Splendid stuff.

Azure Striker Gunvolt: Striker Pack launches on Nintendo Switch today for $39.99. A physical release is planned to hit retail in North America and Europe later this fall!
Posted by Protodude at 11:00 AM