The Legend of Rockman X Arrives in Thailand 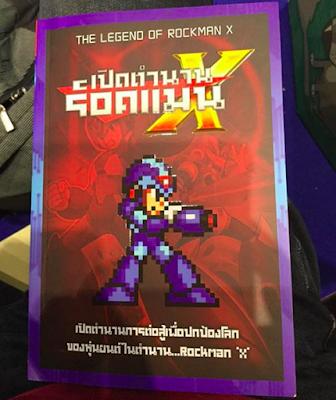 A few years ago a group of tenacious Mega Man fans published a classic series history book in Thailand. They're following it up with a new entry titled The Legend of Rockman X.

As one might expect, the book offers fans a complete compendium of X series knowledge. Each game in the series is covered, featuring in-depth character profiles, artwork and other fun tidbits. There's an entire section devoted to Mega Missions too. It's the next best thing to a hypothetical "Maverick Hunter Field Guild." You can view some sample images here.

Right now, the book can be ordered directly from RockPage's Facebook. Simply contact the administrated and he'll hook you up. Be aware, though, it's written entirely in Thai. I found it to be a neat commodity despite the language barrier. It's a true labor of love from die-hard fans to fans. Check it out, if you are so inclined!
Posted by Protodude at 12:59 PM