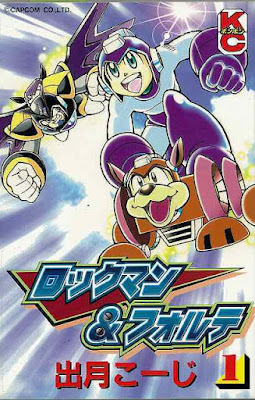 Hot on the heels of the Rockman 8 reprints, Koji Izuki's Rockman & Forte adaptation will return to Japanese bookstores in January, 2016. A single volume, 402-page reprint is currently in the works, which is said to include all nine chapters from its original 1998-1999 Comic Bom Bom run. The book will also contain never-before-seen tribute artwork from Hitoshi Ariga.

Pre-orders are currently available through Fukkan and Rakuten for 2,268 yen ($18.46). Customers who pre-order through Fukkan will be eligible to win exclusive artwork autographed by Izuki via lottery.

As it stands, an official English localization is not in the cards. Maybe UDON will pick it up one of these days...
Posted by Protodude at 1:55 AM