A new trademark for the Mega Man franchise itself has been approved at the New Zealand Intellectual Property Office. Capcom applied for it in September and it was approved on October 16th, 2015. 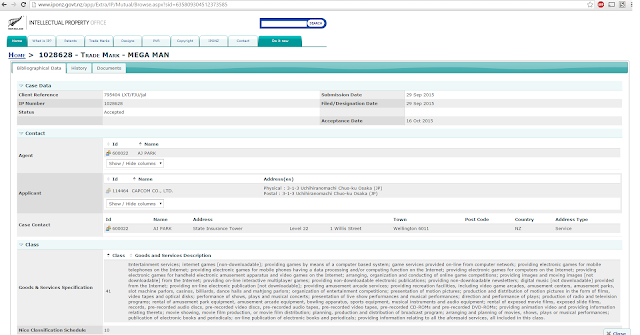 This is NOT a renewal of an older trademark - it's entirely new. According to the IPONZ registry, "Mega Man" is an umbrella term that not only includes video games and paraphernalia but animation and film, too; a nod to Man of Action's 2017 animated series and rumored movie.

The trademark holds broad implications for the franchise's future. From what I've learned Capcom wants to leverage the franchise in non-video game ways. The cartoon is but one of many initiatives to solidify the franchise in the minds of a larger audience. What we're looking at today is further evidence of where things are going. "Mega Man" already exists as a multimedia brand, yes; but this trademark specifically applies to everything here on out.

I believe it's safe to say the brand is on the verge of a resurgence. A new TV show, a new producer, and now a fresh, all-encompassing trademark. It may take a little while for things to be fully realized, but the wheels of change are in motion.

Thanks, Enter the Dragon Punch.
Posted by Protodude at 2:52 PM