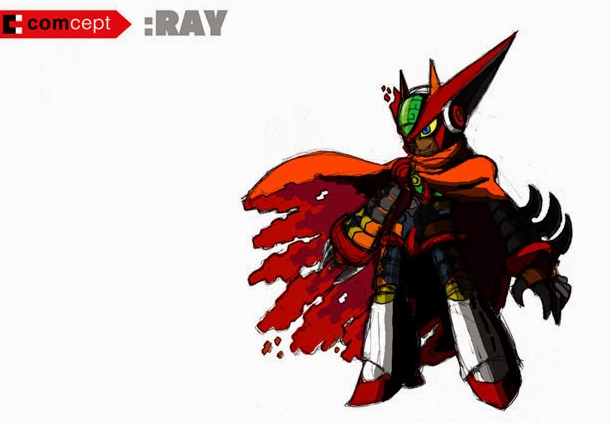 Keiji Inafune and crew are putting the call out for more crowdfunding, according to today's newest Mighty No. 9 update. His studio, Comcept, are asking slacker backers to help reach a $190,000 goal by the end of 2014. If successful, all backers will receive a code to download an additional stage and boss for Mighty No. 9 by summer 2015. The new boss is none other than Beck's fierce rival, Ray (name not final).

As Beck's opposite, Ray is intended to be a tragic character with a huge defect: he is deteriorating. Ray needs to absorb and consume other robots to survive, much like a vampire. Designer Kimokimo deliberately designed the character to appear incomplete -- parts of his body are literally breaking down into Xel, the fundamental building blocks of robotic matter.

Ray and his accompanying stage are being billed as "potential DLC." Comcept says, "We want to stress that none of the developers have or would begin working in earnest on this DLC until their work is done on the Mighty No. 9 retail release."

To help ease inevitable tension, they've laid out their entire cost table, a breakdown of everything $190K will cover. You'll find that and additional details right here.
Posted by Protodude at 11:53 PM