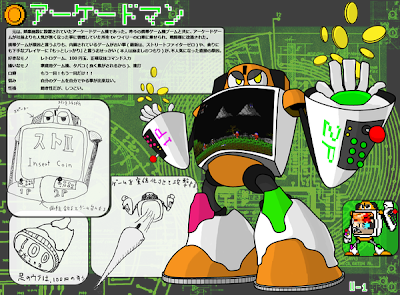 The winner of the Rockman Xover boss character contest held earlier this year has been revealed on Rockman Unity. Say hello to Arcade Man, created by a one Mr. boss13. Arcade Man will soon appear in Xover as an original Master Boss and Battle Memory. As the name implies, he uses attacks based on numerous Capcom arcade games. Creative, no?

The runner-up winners, Tabletman, "There" and Dharman will appear as original Battle Memory cards in the very near future. Head over to Rockman Unity and check them out!

Thanks for the tip, Mac.
Posted by Protodude at 4:41 PM