So About That D-Arts Iris... 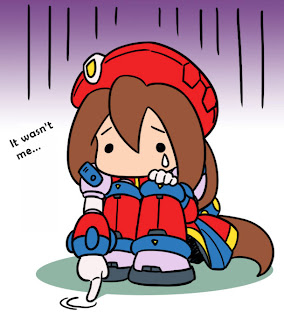 Word of D-Arts Ultimate Armor X's production was met with mixed reactions, to say the least. Of the "fake" figures presented, many had their hopes set on Iris being immortalized in plastic. Even Capcom’s own Ryuji Higurashi was disappointed. He drew this saddened Iris in response.

But the prospect of D-Arts Iris is not a lost cause. Not yet. Rockman Unity's Ucchy has vowed to reignite "that plan," with everyone's support.

The "plan" is purposely left vague, but it's largely assumed he means another character poll to gauge interest in which products fans would like to see next. If so, then Iris could find herself among the choices... and, with a little support, become a figure.

Would you buy it?

Source: Rockman Unity (via The Mega Man Network)
Posted by Protodude at 12:39 PM