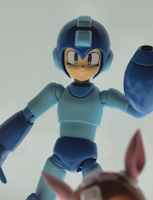 
"In celebration of the 25th anniversary of the original Japan game release, Tamashii Nations is proud to announce the long awaited and highly requested release of classic Megaman into the ranks of the advanced D-Arts high-articulation action figure series. Fan feedback was critical in the design of this set, which features Met and Rush figures! Superior articulation allows for recreating a variety of action poses.

All in all, it's mostly the same tried and true stuff that's been packed with previous D-Arts figures. Not that there's anything wrong with that. Plus, it's good to have further confirmation of Rush and Met.
I'll keep you posted with more details as they come.