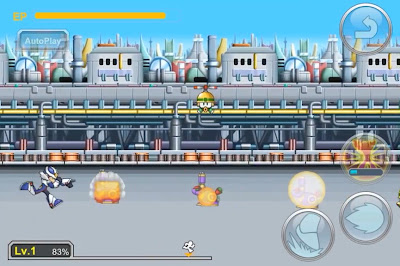 Our buddies over at Destructoid have just gotten their hands on the Tokyo Game Show Rockman Xover demo, and Conrad Zimmerman has posted some impressions. You'll find a portion of his thoughts below.

"Is it [Xover] thrilling? Well, no. The demo was such that I couldn't possibly screw it up. Enemies dealt no damage during the running section and it was mathematically impossible for Storm Eagle to deal enough damage to OVER-1 to destroy him. The combat is, at least insofar as the demo would show, very shallow. There was no blocking, no dodging, nothing really to do at all.

So, why am I not enraged with the fire of a thousand suns? There are two reasons. First, it's a mobile game. I'm not saying we should make excuses for phone games being crappy, but this is a representation of traditional Mega Man gameplay and I think using autorun and turn-based mechanics to represent that on a platform otherwise not conducive to the demands of the traditional design is a novel way to do so."


Though Zimmerman shares a more optimistic outlook, the game is not entirely without its faults. Head on over to Destructoid and read the complete preview!