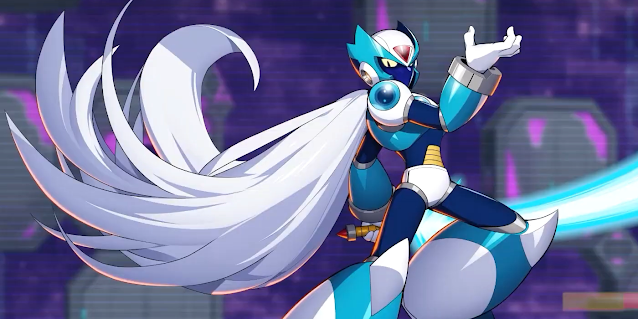 Not long after ViA asked RiCO to make him a Hunter Program in chapter 18, "The Dark Blue" hunter joins RiCO, iCO, Droitclair and Angepitoyeir as the newest original playable character. And just in time to celebrate the game's 2nd anniversary, no less!

ViA's first active skill is ViA Style Sword Technique - Blue. It's a powerful energy attack that strikes all enemies within range. One of his passive skills will let ViA gain a shield when using this skill.

His second active skill is ViA Style Sword Technique - Swift. Performs a quick slash at the target and releases three waves. When playing PVP, you can use this skill to teleport to the location of your rival while ignoring terrain, pretty much the same as ProtoMan.EXE Step Sword skill.

The event stage Summon the Dark Blue Hunter and the DiVE Festival capsule will go live this Wednesday. What's more? Capcom Japan announced via Twitter that Guild Mode is getting new functions this Wednesday too, look forward to them!

Before we finish, it's worth mentioning that ViA now has a voice after 2 years of being mute. His voice actor is Shunsuke Takeuchi.

Judging from the trailer, it looks like players will be able to get tickets by playing the event stage to activate a gacha capsule. You can look forward to free pulls starting this Wednesday!