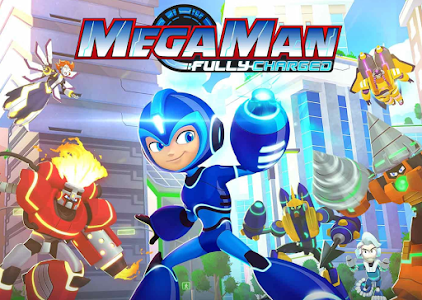 Roughly two years after the show's conclusion, WildBrain and Dentsu Entertainment are finally - *finally* - freeing Mega Man: Fully Charged from the confines of Cartoon Network. Too little, too late? Yes. But this is pretty good news!

Starting today, you can legally download the first 26 individual episodes from Amazon for $1.99 a piece. If you don't mind SD quality, though, they're a mere $0.99.  Grab 'em here.

As for when the second half of the show drops, your guess is as good as mine. This was a stealth release without an announcement from WildBrain or Dentsu. So... check back soon?

For the uninitiated, Fully Charged hasn't seen a single, official "home video" release in any region. In the states, the show has predominately been available through Cartoon Network's website, app and video-on-demand via select cable providers. Needless to say at this point, but that very distribution model killed the show. Now anyone can watch it!

I've always felt Fully Charged would fare better on an accessible digital platform. Although the proverbial season 2 ship has sailed (sort of), perhaps now it can attract the audience it so desperately wanted.

A Netflix or Hulu release wouldn't hurt either...

Posted by Protodude at 4:52 PM