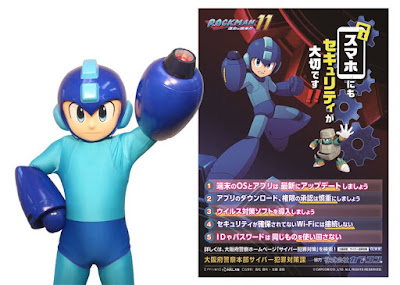 Mega Man has been enlisted to help raise awareness about cyber security in Osaka, the prefecture's police force announced. The government has declared February 1st through March 18th as "Cyber Security Awareness Month", and Mega Man will be there front and center.

Mega Man will be honored with a letter of certification on February 1st at the Osaka Station Atrium Plaza (North Gate Building, 2nd floor) on February 1st at 2pm. Citizens and fans are encouraged to come and watch the event and pick up some exclusive, Mega Man-endosred cyber security goods.

Although Mega Man.EXE would probably be a bit more fitting here, it's Mega Man's classic incarnation that will be the face of the month. It doubles as a special promotion for Mega Man 11, too. If you're in the area, why not check it out?

Source: Osaka Police | Rockman Unity
Posted by Protodude at 11:10 AM