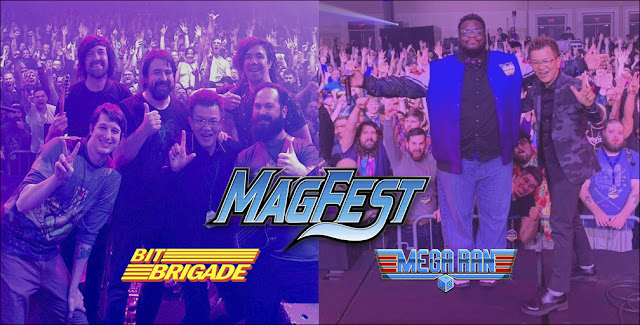 Fan-favorite Bit Brigade and Mega Ran headed back to MAGfest this year to perform live shows. They don't need any kind of introduction for veteran Mega Man fans, but just in case you need a little introduction, Bit Brigade is a band that performs rock covers of full NES game soundtracks while speedrunning live. Mega Ran, meanwhile, is a "nerdcore" rapper that became notoriously famous among Mega Man fans with his 2007 album, "Mega Ran", a tribute album to Mega Man with rap lyrics. You may also remember him for his appearance in the Mega Man 30th Anniversary livestream where Mega Man 11 was announced. He also had a song featured in Mighty No. 9.

Mega Man 2 composer Takashi Tateishi attended both Bit Brigade and Megan Ran's concerts. Although he didn't perform, Tateishi actually had the chance to do some singing with Mega Ran (speaking of Takashi Tateishi, you may want to check what he had to say about Mega Man 2's development).

Hit the jump and enjoy the music!