The Rockman X Novelization is Based on the Manga 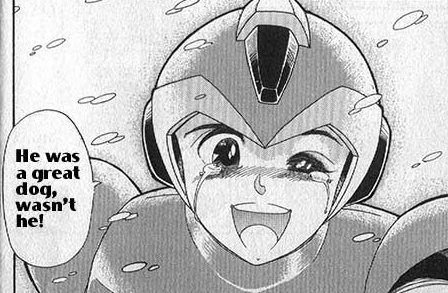 I don't believe this was the twist Iwamoto was referring to, but according to the recently added product description on Rockman X: The Novels Amazon page, the book's plot is reportedly an adaptation of Iwamoto's X1 manga.

By adhering to Iwamoto's 1994 adaptation, we can expect to see manga-exclusive characters and events in novelized form.  For example, the opening moments of the manga throw readers in the midst of Sigma's uprising.  Here, X finds himself at a moral impasse with an Irregular called Pierrot. X is unable to bring himself to off a member of his own kind, so Zero does the deed for him.  A few pages later, X, to Zero's surprise, elicits an emotional response to a dog killed in combat: he's actually crying.  These early moments lay the foundation for X's character arc; the struggle of being a robot with human feelings.

There are currently no plans for an English language version of Rockman X: The Novels.  I don't doubt, however, the possibility of someone taking up a fan-translation down the line.  In the meantime you should check out Dr. Neko and Ayami Zero's X manga scanlation project if you haven't already.  An oldie but a goodie!
Posted by Protodude at 4:13 PM