Blast from the Past: Unreleased Star Force Figures

Compared to its predecessor, the Mega Man Star Force series received very little merchandise aside from a few electronic doodads and collectibles. At one time, however, a line of high quality, non-poseable figures were in the works courtesy of West Kenji. 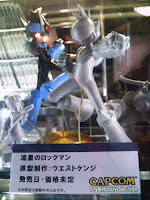 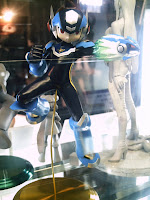 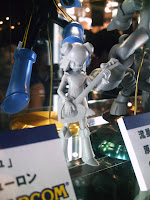 For one reason or another, these plastic heroes fell by the wayside. Like so many other Mega Man figures before them, production ceased before they saw retail. Our only glimpse of the canned series came from the 2006 Tokyo Game Show, where protoype molds were displayed for show-goers. Geo Stellar in his Mega Man duds, Harp Note and Taurus Fire made up the line. There's no record if any other characters were planned, but it's not a stretch to think otherwise.

And, really, that's all there is to it. So little information exist beyond their one and only public appearance that the line pretty much fell into obscurity. It's quite unfortunate; we could have used some more Star Force figures. Thankfully, we will always have these photos to admire and wonder what could have been.

You can check out more images of each figure (save for Taurus Fire, he's been through an earthquake) here.
Posted by Protodude at 6:30 PM