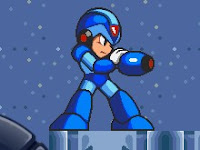 The version 1.01.10 update gives the game full iPad and iPad 2 high resolution support. Sprites and menus are now optimized to fit iPad displays, whereas the original version had to be scaled to fit. The other big addition is a brand new mode. For players looking for a challenge, Capcom has introduced Time Attack Mode.

In Time Attack, your life bar has been replaced with a gradually depleting time gauge. The game ends if you fail to complete a stage before your time is up. Fortunately, enemies drop time replenishing items while "T Tanks" completely refill the gauge just before you have to face a boss. Records are logged online via Apple's Game Center service, so feel free at trying your hand to reach the top of the leader boards.

I've also heard whispers that the 1.01.10 update removed the hidden 25th Anniversary logo. Not that it has any bearing on the game itself, but it's interesting to see it up and disappear deliberately.

Thanks for the tip, Mike!
Posted by Protodude at 10:01 AM