The Protomen Need Your Help

Mega Man-inspired rock band The Protomen would really like to perform at PAX Prime (Penny Arcade expo) this year; so much so, that they're asking you, the fans, for assistance. The band is rallying support via petition to bring them to the West Coast. A bulletin posted at their official site reads: 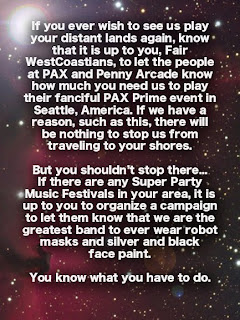 The Protomen haven't performed in the West Coast for years, so this would be a pretty significant event. Show your support and sign the petition!

Thanks, Cassandra
Posted by Protodude at 5:07 PM