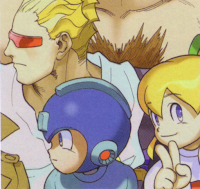 I've been sitting on this one for a while, but considering there isn't much happening news-wise today, thought I'd talk about it.

Rumor has it that Capcom is developing Marvel Vs. Capcom 3, and according to a source at Team Spooky, the game could be announced as soon as May. How legitimate is this supposed leak? Turns out the source of the rumor, an individual by the name of Henaki, is the very same fellow who leaked the entire Super Street Fighter IV roster last summer and got it right on the nose.

Coupling this news with Tatsunoko Vs. Capcom producer Ryota Niitsuma's recent statements about a new Versus series game announcement this year, it seems a lot more likely than it seems not likely that Capcom's working on something:


“I would love to do more versus series, more types of games like Marvel Vs. Capcom 2,” Niitsuma said. “There are all of these possibilities working with other companies, seeing what we could do with them. There are so many game companies I’d love to work with."

“If sales are really good (for Tatsunoko vs. Capcom: Ultimate All-Stars) then you can see an announcement within this year.”

And sales have been good, according to Capcom. Perhaps an announcement is just around the corner?
Posted by Protodude at 12:16 PM