No Anime Adaption For SSR3? 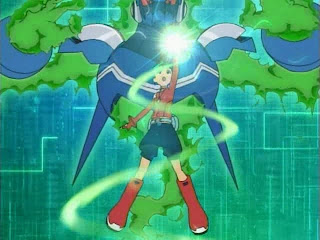 The past weekend was truly the weekend of Shooting Star Rockman 3. Capcom pretty much laid out their marketing plans for the newest iteration of the series SSR series: Two versions seeing a simultaneous release, merchandise tie ins (in the form of promotional cards) and a new manga adaption with Takamisaki San at the wheel. But wait, something seems to be missing. Oh yeah, the traditional anime adaption.

There was NO mention of an SSR3 anime adaption at the Summer Festival at all. Not even a hint. What gives? Has Capcom ceased all funding to Xebec and sponsors? It's likely. Afterall, "Ryuusei no Rockman Tribe" was seemingly cancelled months ago, its time slot now occupied by the succesful show, "Penguin no Mondai."

Should fans be worried? Maybe. In the past, Capcom has used promotional events such as the Summer Festival to give us a glimpse of the upcoming anime adaption, sadly this was not the case.

However, we shouldn't jump the gun just yet. It's possible as more info of the "Red Joker" version comes to light, so will informaion regarding the SSR3 anime adaption (and of course, Takara Tomy merchandise based off of the show).

This is-afterall, Capcom we're talking about. They like money. What better way to promote a game than give it its own anime? It's a powerful marketing tool.

For now don't fret. We have a few months before SSR3's release. Who knows what will be announced between now and then
Posted by Protodude at 11:53 PM