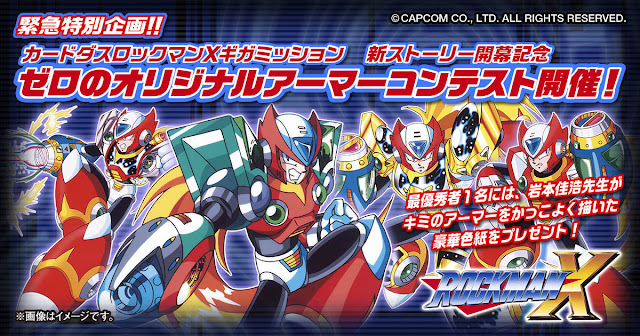 Today, Bandai announced the winner of the Zero armor design contest they held for the upcoming release of the Rockman X Giga Mission Carddass trading car set. A total of 108 designs where submitted (between April 26th to June 30th). See the winner after the break! 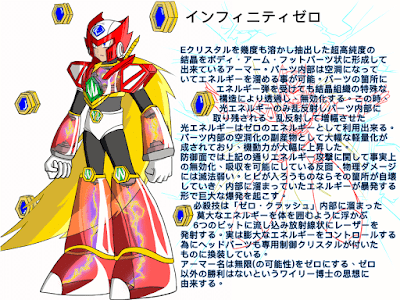 And the winner is.... Infinity Zero by Kurome, a Rockman fan that loves the X, Zero and DASH series.

This is what Kurome had to say about his creation (thanks to Sidier for translating it):

"To give up a "power-up" feeling while keeping it simple, I choose an armor which has clear crystal parts; energy flows within them. Also, it's not the type of armor that you can say it's all-powerful, rather it has functions that are both merits and demerits; but Zero's ability to take decisions can cover those demerits; so I think that they won't pose much of a hassle."


As the winner, Kurome will be receiving a shikishi dedicated by Yoshihiro Iwamoto (a hard-board, paper edged with a thin strip of metallic gold paper that's often used for calligraphy art), and a special smartphone wallpaper. The rest of the participants will receive a commemorative smartphone stand-by image.

Just like the previous armor design contest for the Rockman X & Rockman X Mega Mission Selection Box, the winning design will be redrawn by Yoshihiro Iwamoto and likely to appear in the booklet that comes with the box set.

Below you can see the winner of the previous contest next to Iwamoto's own interpretation.


If you want to check out all 108 entries for the Rockman X Giga Mission Carddass contest, you can do so here. There's plenty of cool designs to see, some of which are by well-known names in the Rockman community.