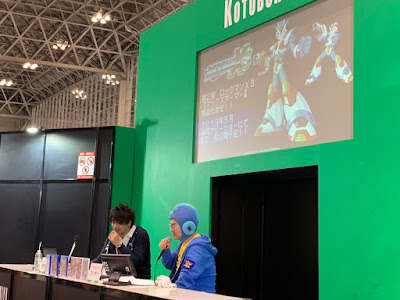 Vanilla X won't be the only Rockman X series model kit coming from Kotobukiya this year. During a special stage show at Wonder Fest, the company confirmed plans to release a follow-up model kit based on Rockman X3's "Max Armor" (aka "Third Armor"). The Max Armor kit will officially be revealed in May at the Shizuoka Hobby Show.

Believe it or not, this is the first model kit based on the Max Armor made in 23-years. Bandai released two variations of the armor back in 1996: The white "Max Armor" and the golden "Hyper Special".  Kotobkiya's rendition will naturally be far more articulated, detailed, and larger than Bandai's kit. It's definitely something to look out for.

Source: Rockman Unity
Posted by Protodude at 10:25 AM