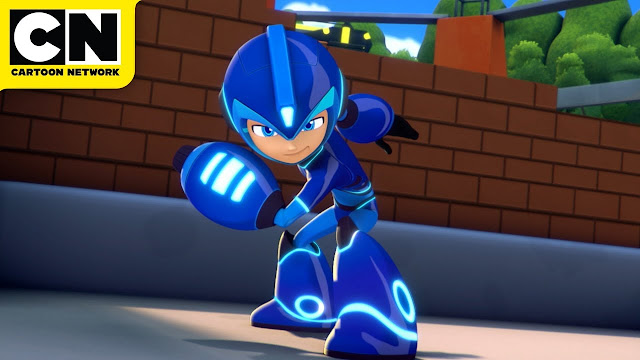 A string of nine new episodes of Mega Man: Fully Charged are heading to Cartoon Network in the States, Animation Magazine reports. Not only that, the show will also begin airing on weekday afternoons at 12:30pm ET/PT starting Monday, March 11th.

Episode titles and descriptions after the break!


Sunday, March 3 at 6:30 a.m. (ET/PT) “All Good in the Wood” When Suna and Ashley’s science project turns into a hungry blob monster, Mega Man must team up with Wood Man to shut down the experiment gone wrong before it devours the city!

Sunday, March 10 at 6:30 a.m. (ET/PT) “Fire Man in the Wood” While hiking on a dormant volcano, Aki sets out to retrieve Ashley’s lost camera and, as Mega Man, to stop Fire Man from setting off an eruption!

Monday, March 11 at 12:30 p.m. (ET/PT) “A Split End” After replicating Cut Man’s powers, Mega Man goes on a perfectionist spree, putting him on a collision course with Cut Man himself, whose latest stint as a hairdresser hasn’t helped him overcome his own compulsions.

Tuesday, March 12 at 12:30 p.m. (ET/PT) “All Play and No Work” Mega Man must resist the influence of a prankster bot named Chaotique, whose devil may care ideology appeals to the overworked superhero, until his friends pay the price for his dalliances.

Thursday, March 14 at 12:30 p.m. (ET/PT) “Blast Resort” Mega Man must assist Blasto Woman in a heist to stop a powerful EMP emitter from falling into the wrong hands.

Friday, March 15 at 12:30 p.m. (ET/PT) “Too Much Is Never Enough” Envious of Namagem’s ability to wield more than three powers at a time, Mega Man tries taking all of his replicated schematics on board, with grave side effects.

Sunday, March 24 at 6:30 a.m. (ET/PT) “The Bluster Bunch” A trail of tornadic destruction leads Mega Man, Suna, and Rush through a series of encounters with Air Man’s quirky siblings.

Sunday, March 31 at 6:30 a.m. (ET/PT) “It’s Chemistry, Man” Chemistry Man lays siege to Silicon Central when he discovers that his replacement, Miss CHO, has been presented with a teaching award.


Although it's nice to see the show expanding out of weekend mornings, the 12:30pm weekday timeslot isn't much better, honestly. Everyone that should be watching the show will be in school. Fortunately, we can expect to see these nine new episodes on Cartoon Network's website and VOD services, too. We'll keep an eye out.