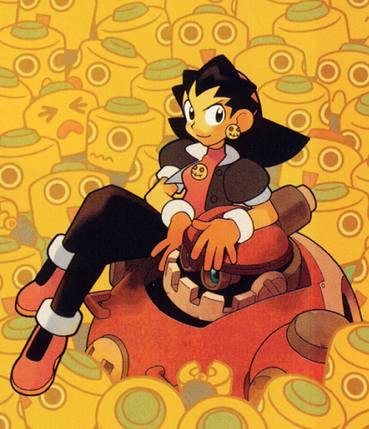 The Misadventures of Tron Bonne looks to be finally hitting PSN in North America. The title has been rated by the ESRB, with PlayStation 3, PSP and PS Vita listed as platforms. A release date is not available at this time, pending official word from Capcom US.

It's great to see this happening after a long period of limbo. For the uninitiated, all three Mega Man Legends titles have struggled to launch on PSN due to property infringement issues. Mega Man Legends 1, for example, infringes on real-world products and institutions: references to Oronamin C energy drinks and YAG Animation school specifically. These logos were removed in subsequent re-releases, hence the PSP version can be sold on the Japanese PlayStation Store.

To my knowledge, Tron Bonne has always been free of logos and signage of other people's IP. So this title's hang up was seemingly related to voice overs, scores or soundtrack. Those issues have since been resolved, it seems, and the game is ready to roll out litigation free. The future for Mega Man Legends 1 and 2, however, remains to be seen.

We'll keep an ear to the ground. Hang tight and fingers crossed!

Source: ESRB
Posted by Protodude at 10:55 AM