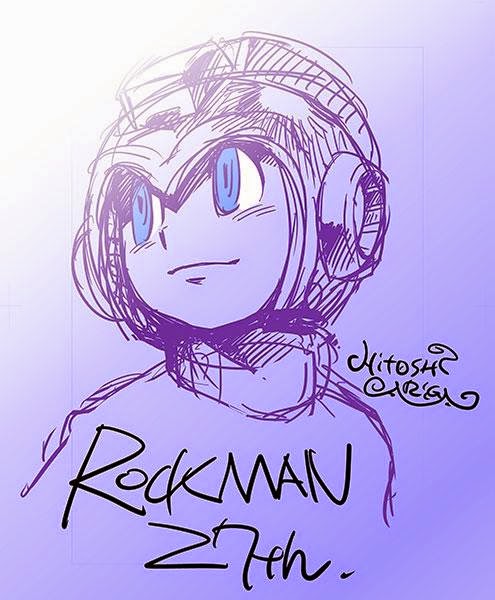 It's December 17th in Japan, and today marks the 27th anniversary of Rockman. Sadly, there really isn't much going other than a bevy of classic titles hitting the Japanese PSN and Wii U. Hopefully we'll be seeing some of that on our end. Mega Man Zero might be up on the North American eShop this week but other than that, we're probably in for a quiet one.

I wanted to keep this post light and breezy, so I'll just say that despite the lack of new games and such, I'm thankful for Mega Man's appearance in Smash. It's been great to see this icon thrive among Nintendo's best, and I hope it will pave the way to a brighter future. Nintendo did a damn fine job here and I know I'm not alone when I say, "I want more."

I leave you with the above celebratory piece from Rockman Megamix author/illustrator Hitoshi Ariga. For comparison, here's Capcom's.

Peace out, home-fries.
Posted by Protodude at 5:21 PM