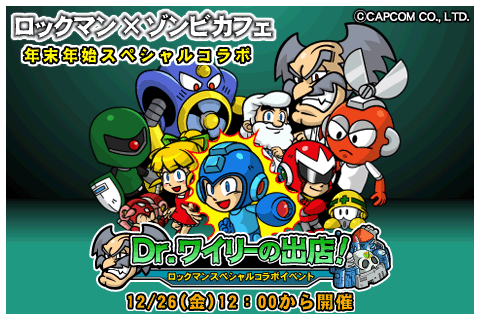 Managing your very own restaurant is challenging in itself, but with all these new Mega Man games coming out one wonders how Dr. Wily will find the time. He's going to try to make it work, though, with the grand opening of his own personal food stand in mobile game Zombie Cafe.

Wily's food stand will be open for business December 26th as part of a special event. Details are scant at the moment but the promotional image above suggests other characters could appear in some capacity. This event has only been announced for the Japanese version despite the game's worldwide availability. I'll update this post should I hear otherwise.

That's pretty much all there is to say on this one, really. Bit of a random crossover, don't you think?

Thanks to Heat Man for the tip!
Posted by Protodude at 12:21 AM