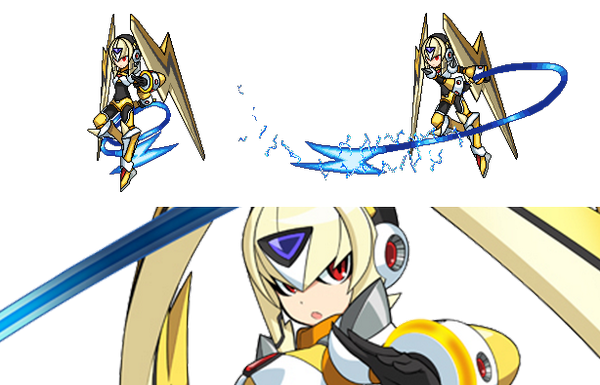 The fourth (and presumably) final member of Nero's inner circle of Rockman Xover baddies has been revealed. The electrically charged "Oro S" now roams the halls of the Battle Tower. The so-called "Maiden of Lightening" is actually the older sister of Verde R. Small word, no?

As per usual, Oro's emergence brings a new piece of music. You can listen to the ripped track here (courtesy of MidniteW). We can assume this will be one of the many pieces headed to the "Capcom Special Selection" Rockman Xover soundtrack.

So with all four bosses revealed, we're left to wonder what the Battle Tower will bring next. Many Xover fans believe this is not the last we'll see of the big four -- a combination, a single boss made up of each member, may be in order.