Lol, Are You Serious? 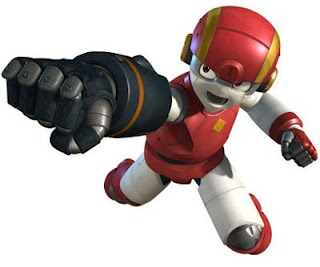 No, HeatGuts Style Rockman did not get his own show. What your looking at is the saddest rip off of Rockman yet: "Eon Kid"


“The story centers around Marty, an enterprising kid who deals in scrap robot parts. One day he stumbles upon the ancient Fist of Eon. Unexpectedly, the Fist attaches itself to Marty's arm, endowing him with unknown fighting powers and at the same time putting him at the heart of a centuries-old struggle between good and evil. Marty soon realizes that fist attaches to him because he is the descendant of the Eon clan.”

As a bonus, I give you the action packed opening:

Posted by Protodude at 3:22 PM