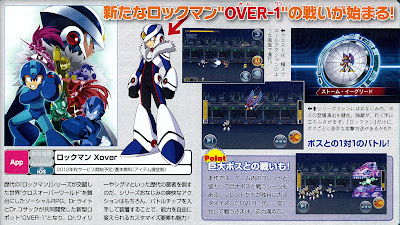 UPDATE: Full scan added above. There's a couple new screens in there, too. Thanks for the contribution, Reploid21XX!

Tarbo-san of COCOROG has gotten a hold of a couple new details for Rockman Xover, the upcoming social RPG for iOS. It's not terribly earth shattering, but interesting nonetheless.

Firstly, the protagonist's name is OVER-1. It's pronounced "over one."

Why "OVER-1" and not something a bit more fancy like "Rockman Xover"? Well, it's like a serial number; he's a mass production model. A personal name may serve little use to OVER-1, although I wonder if the game will let the you rename him to you liking. We're talking about an RPG, after all.

Second bit of info: players will use "Battle Chips" to customize their very own OVER-1. These chips have no connection to Mega Man Battle Network, mind you. It's assumed this is another name for the "Battle Memory" property mentioned over on the game's official site.

UPDATE 2: The full scan is now available and with it comes even more details: 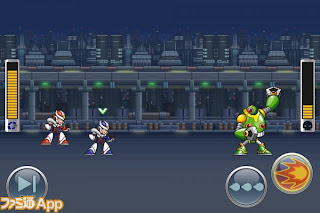 Further, you'll find a big piece of OVER-1 artwork at Famitsu App. It's the same one in the scan but, well, bigger.

And that's all for now, really. I'll let you know if anything else pops up.

Credit: Reploid21XX and The Mega Man Network
Posted by Protodude at 7:14 PM