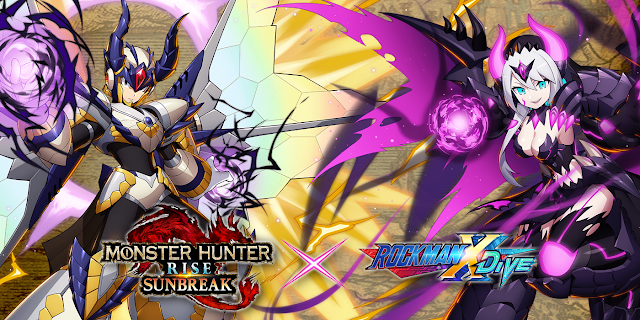 This Wednesday, the third collaboration with the Monter Hunter Rise series begins. It brings a new stage, the Missions from the Kingdom event, and the Elgado Market. What's more? Shagaru Armor X will be available from the gacha tomorrow. Gore iCO will join in during the event's second week in a separate gacha banner.

One of the skill card will enhance the tracking effect and deals damage to all enemies in the area of impact.

While its not properly explained in the trailer, it seems he can enter Frenzy Status to increase damage dealt and weaken enemy defenses, among other things.

The boss of the event stage will be Malzeno Dragoon which is none other than Magma Dragoon and players will be able to ride REX-2000 Tigrex which originally appeared in the 2nd Monster Hunter Rise event: Urgent! Support needed at Shrine Ruins.

When it comes to the missions from "Mission from the Kingdom" event and the Elgado Market, players will be able to get Elgado Tickets by login in every day and completing missions, later this tickets can be spend in the Elgado Shop which content you can check below.

If you didn't get some of the previous Monster Hunter characters and weapons during the previous weeks reruns, you have another chance now!

For more information about the missions to complete and special rewards for those who spend a certain amount of Elemental Metal, check the official event website here.

And that's all for now. Check the developer YouTube channel next week for Gore iCO's showcase trailer. After this event we are entering the Japanese version second year anniversary, look forward to it!